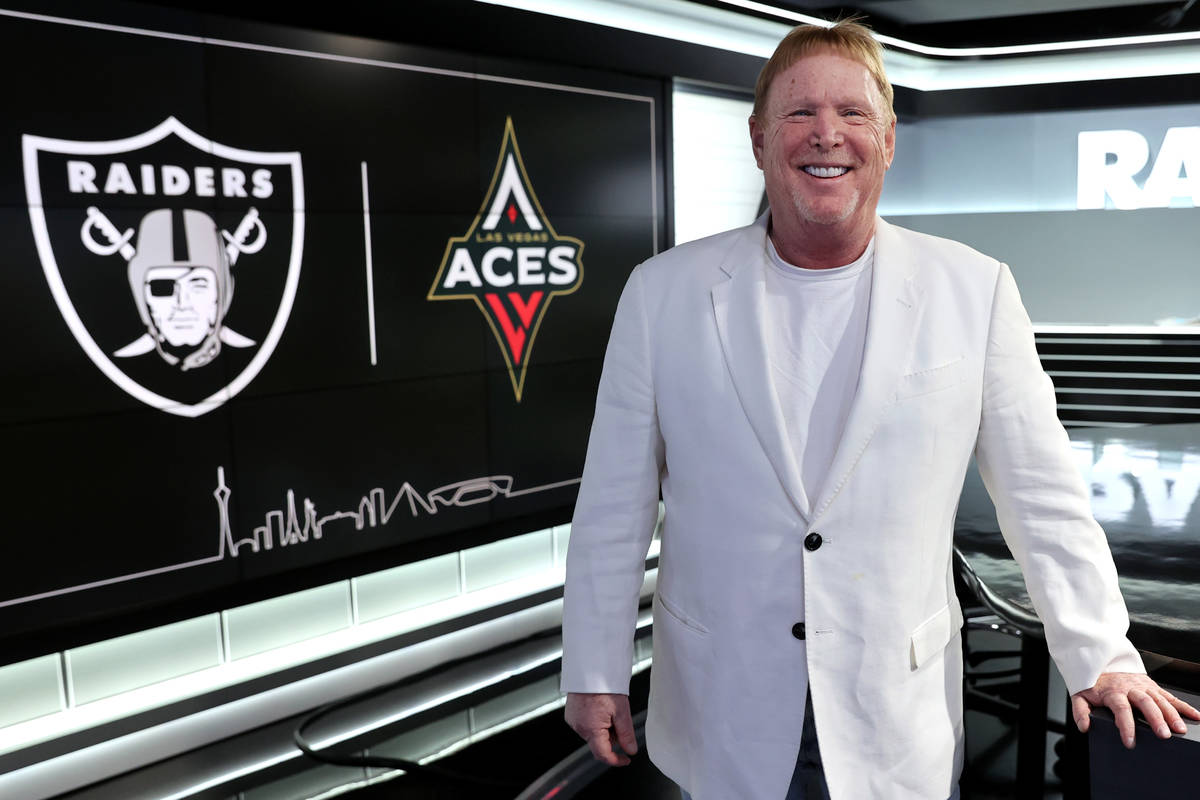 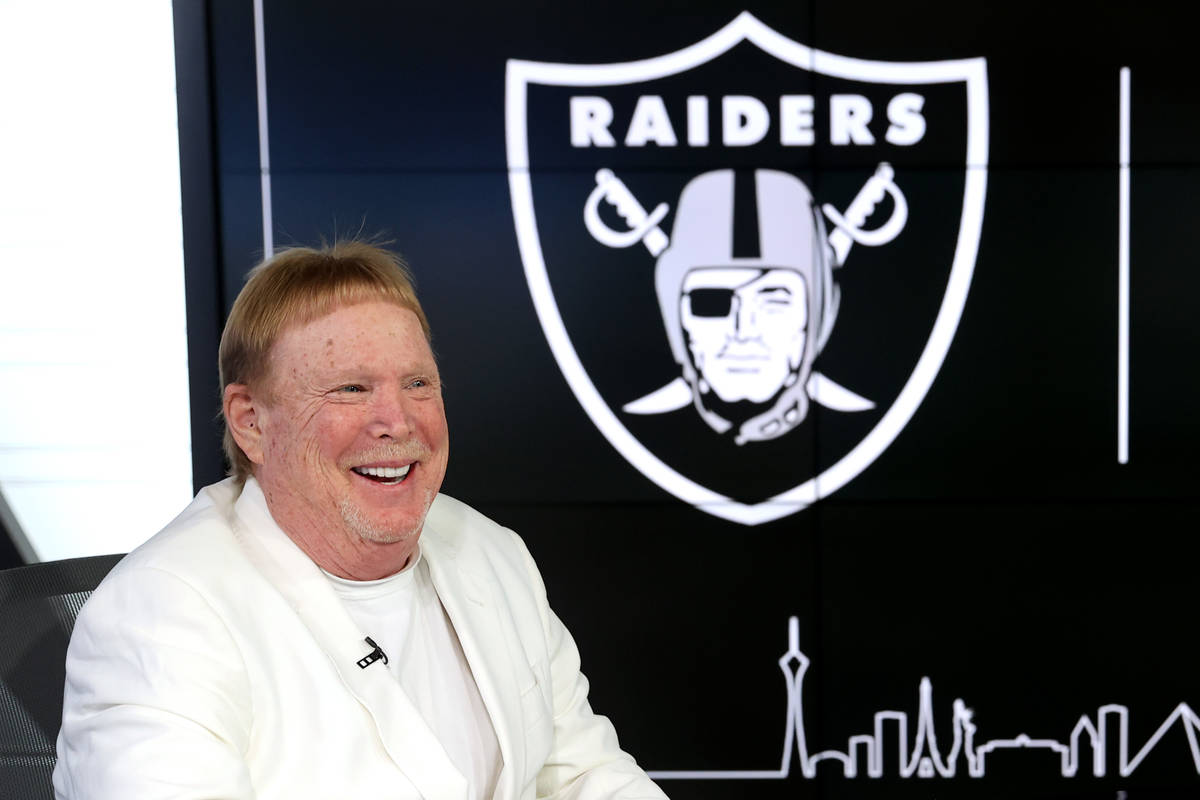 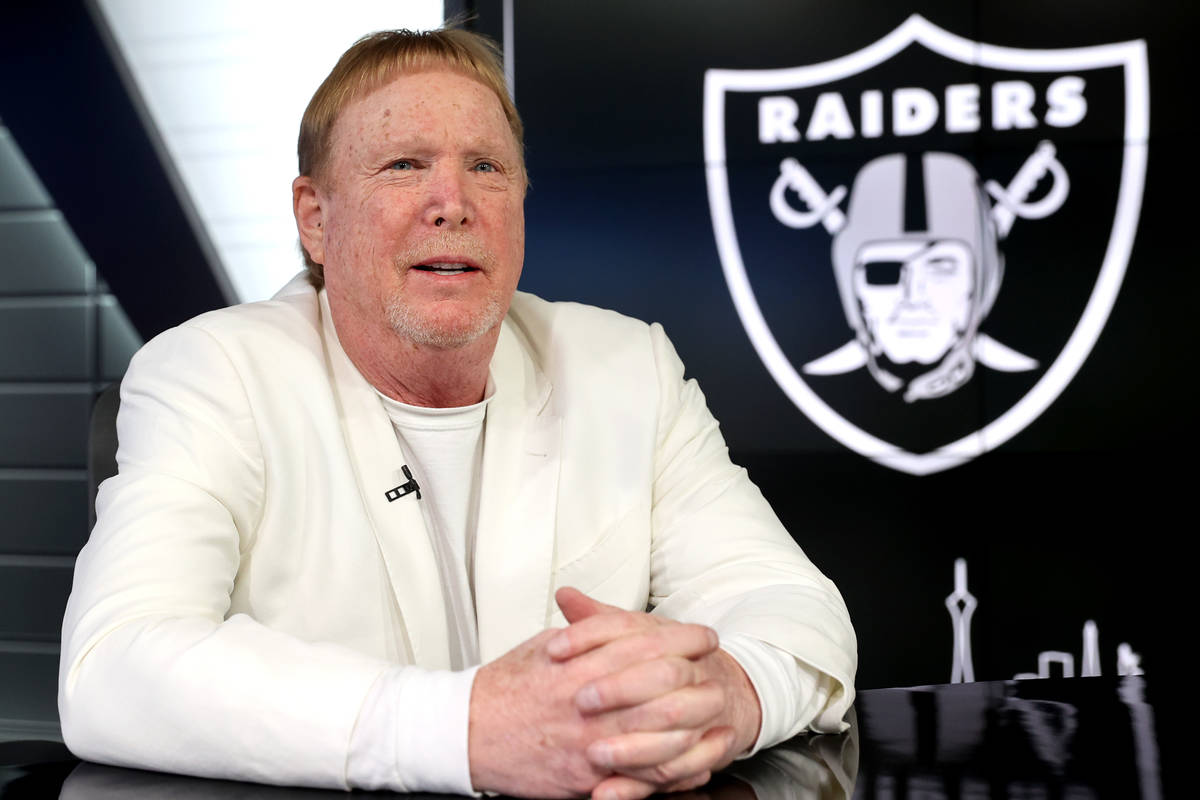 Raiders owner Mark Davis is used to life in the shadow of his father Al, whose massive legacy is matched by few in the history of professional football.

Slowly but surely, however, Mark is creating one of his own. Even if he doesn’t allow himself to see it that way.

“I’ve always said the least important thing in life is the score at halftime, so I can’t be thinking about legacies right now,” Davis said. “We’re talking about building something.”

That process began with his relocation of the Raiders from Oakland to Las Vegas and their spectcular new home that is Allegiant Stadium. It continued when Davis purchased in January the WNBA’s Las Vegas Aces.

Al Davis remains, now and forever, the most indelible figure of all things Raiders. He died in 2011, but his presence defines the organization. It happens when you are principal owner and general manager for 39 years.

That 85-foot memorial torch inside Allegiant Stadium might be ceremoniously lit to honor Davis before each home game, but understand that the successful and controversial flame ignited by him when running the Raiders will never really expire. 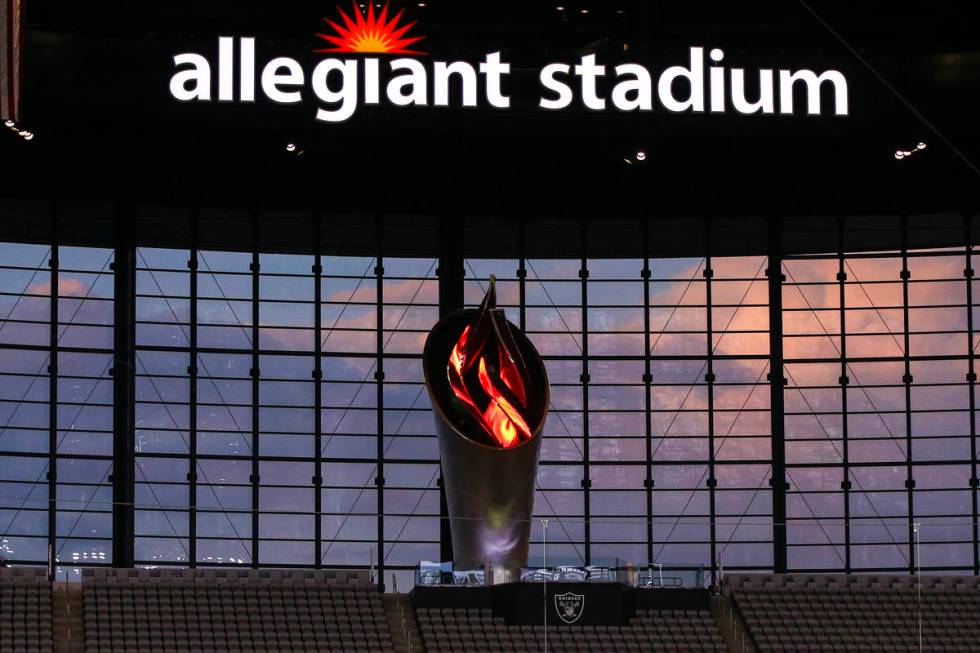 “Al was a genius and a progressive, but he also had paranoid tendencies,” said longtime Bay Area sports columnist Ray Ratto. “His story is told through one of those prisms depending on who is telling it.”

Ratto said father and son are alike in one significant regard. “Take me the way I am” is an approach to life they share.

“Maybe that is (Mark’s) legacy — don’t go out and seek a positive one but that he doesn’t want a negative one,” Ratto said. “Who does? That makes him closer to the every-man owner than maybe anybody in sports.”

One whose arrival to Las Vegas has proven to be a financial bonanza.

A tidy return on investment: The Raiders today are ranked as the world’s 29th most valuable sports franchise at an estimated $3.1 billion. In the last five years, that value has jumped some 117 percent.

Which brings us to what Las Vegas has done for the Raiders, the most prominent example being that $750 million public contribution toward the building of Allegiant Stadium.

Time will pass, those from both sides of the stadium dispute between the Raiders and the city of Oakland promise, and the entire narrative as to all that transpired will be told.

Some believe it rather simple: That the reason Davis was initially involved in a potential move to Los Angeles (one the Rams and Chargers now share) and the reason he flirted with San Antonio in trying to create a market was that he long since accepted the realities of Oakland.

The city wasn’t going to invest hundreds of millions in public money toward a new venue, so Davis discovered in Las Vegas the largest public subsidy ever earmarked for an NFL stadium.

“For anyone to question his desire to get something done in the Bay Area is both ignorant and uninformed,” Raiders president Marc Badain said. “Even up until the time we were negotiating here, he always said (Oakland) had a chance.”

This might not define a legacy, but it is stuff of legend: During the long and dreary days of a pandemic shut-in, Davis hunkered down at his temporary home — Westgate Las Vegas.

“I was the only person living there,” Davis said. “There were like 25 security people there on a daily basis. Other than that, I was the only one. It was like ‘The Shining.’ Everyone in (Las Vegas) was looking for toilet paper and I had 3,000 rooms’ worth.”

Believe it. He would have invited the entire city inside if allowed.

Davis will tell you how significant those two years leading up to the official move were in connecting his franchise to Las Vegas. NFL owners approved relocation in March of 2017, but the Raiders remained in Oakland until they could officially kick off at Allegiant.

While there is no debating the intimate connection felt between the Golden Knights and Las Vegas — one forged from the October 1 mass shooting during the NHL team’s expansion season — the Raiders too have spent their short time here integrating themselves into the community.

“Their involvement in the community is really impressive,” Gov. Steve Sisolak said. “They don’t say, ‘No,’ when you ask them for something. They just say, ‘Yes,’ to any community service item.”

Davis has often said he wanted the organization to earn such attachment, which he doesn’t think would have occurred if the Raiders had arrived earlier and, say, played a few years at Sam Boyd Stadium.

He believed all infrastructure needed to be in place. 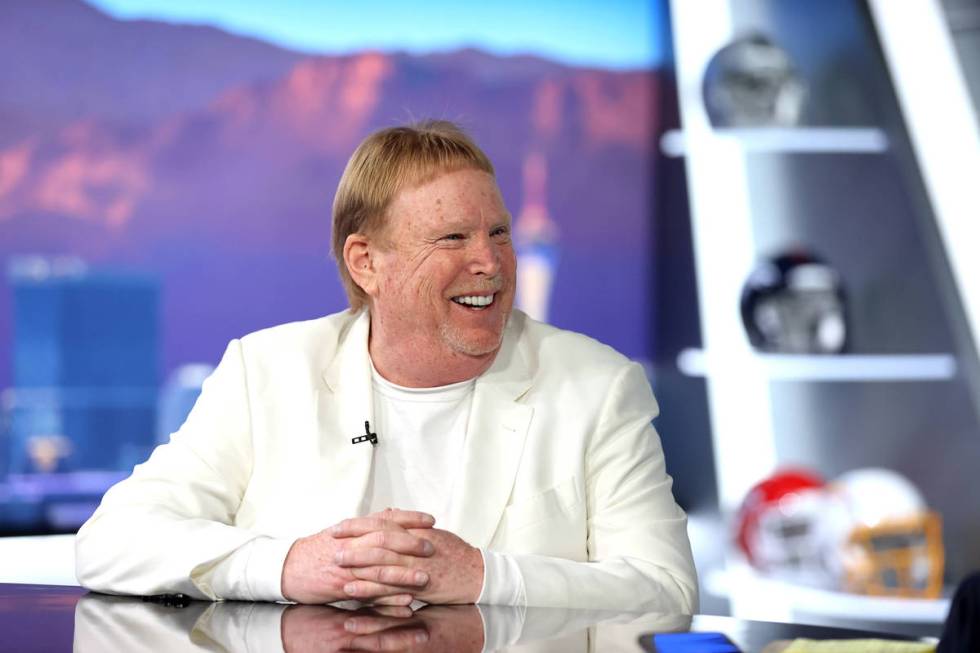 “Mark has made a commitment to Las Vegas and delivered every step of the way,” Raiders head coach Jon Gruden said. “The community is really important to him and he’s proud to be part of it. It shows the way Las Vegas has embraced the team. You can feel the excitement everywhere around here.”

All of his dreams for the Raiders had come true. The beautiful practice facility. The magnificent stadium. The community interest.

“And then the pandemic hit and the world stopped,” Davis said. “That’s how life goes sometimes.”

What those who committed to paying traditional sky-high NFL season ticket prices missed watching in person last season was an 8-8 team whose franchise missed the playoffs for a 17th time in 18 years.

Gruden will now enter a fourth year since returning to the sidelines. He is 19-29 on this second go-round after signing a reported 10-year deal in 2018 to get things turned.

They haven’t been yet.

“My role in taking over for my father when he passed away was to continue the legacy that he built and the mystique of the Raiders,” Davis said. “The one thing that I have failed in so far is we haven’t won. That’s what this team is about. It drives me, absolutely. It does.

“I felt bringing Jon Gruden into the organization was very stabilizing and he has a long time to do the things he needs to in order to get it done. I wasn’t looking for a quick fix. I was looking for something that we built for the future. We’re doing a wonderful job off the field, but we have a lot of work to do on it.”

The latter isn’t an issue with his other team.

Over nearly 30 years working for the Raiders, during which time she became the NFL’s first female front office executive, Amy Trask would frequently need to discuss a matter with Al Davis or have him sign a document.

Often, she was made to wait.

If the Raiders are the impetus by which Davis’ heart beats, it appears he has saved a portion for the Aces.

He bought the team from MGM Resorts International and is building an 80,000 square-foot training facility next to the Raiders’ headquarters in Henderson. 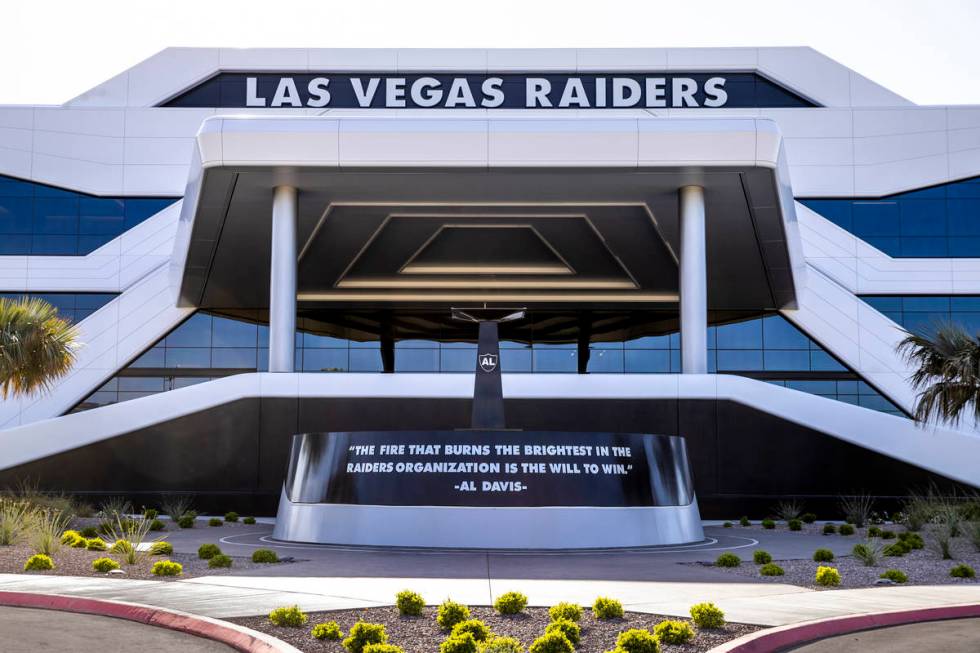 Davis has been a courtside staple since 2017. Two years later, the Raiders purchased 1,600 tickets for local youth to attend home games. Davis recently announced that Aces season-ticket holders — around 2,000 — will attend games this season for free. He is eating the entire cost.

Numbers are sometimes just that. His football team has a 53-player roster and $180 million salary cap. His basketball team has 12 players and a $1.3 million cap.

Davis, though, recognizes the disparity in compensation between his male and feamle athletes and has already proven to be overly passionate about ensuring women receive a larger piece of the financial pie. He is pushing fellow WNBA owners to negotiate a more lucrative media rights deal.

“It will be a different style of ownership from the big conglomerate to an individual, but the commitment from (Davis) is as much or even more than the MGM,” said Aces coach Bill Laimbeer, whose team is among the favorites to win this year’s title. “His commitment to making us as good as we can be is phenomenal.

“My goal is to educate him. He wants to learn everything about the women’s game. In the long run, I’d like to see him have whatever say he chooses — hey, it’s his money — but he knows he has a long ways to go. He wants to be taught and that’s wonderful, from both a basketball and business side as well.”

Already, the first-year owner is dreaming about how legacies can be born for all involved.

What’s he looking forward to most?

Minutes after league owners voted 31-1 in favor of the Raiders relocating to Las Vegas, Davis stood behind a podium in Phoenix and talked about how his father often stated that the greatness of the Raiders was in its future.

The prospects for a rewarding one born and nurtured in Las Vegas seem more likely than ever.

“Al Davis was Oakland and Mark Davis will be Las Vegas,” Sisolak said. “The thing that has surprised me most is how approachable he is. He’s very recognizable — I don’t want to say it’s the haircut, but that certainly helps — and he takes an inordinate amount of time to visit with anybody and sign autographs and talk to people. He shows and feels his best relating to everyday people.”

In the end, legacies are built. It’s just that many prefer to focus on the process and not the outcome.

So maybe that’s it, then, for Davis.

Maybe it’s still halftime and he’s not near ready to keep score.

“His (legacy) never has seemed to be the motivation behind any of his decisions,” Badain said. “When people ask me about him, I say he’s the anti-sports owner. He doesn’t want any credit. He doesn’t really want his name in the paper, but he will put his face out there when things go badly.”

As an example, Davis last month took responsibility for a tweet that appeared on the team’s official account about the verdict in the George Floyd murder case that was roundly criticized as insensitive.

It read, “I CAN BREATHE 4-20-21,” which Davis meant as a way to applaud the guilty verdict. But an hour after the tweet went public, it already had received nearly 20,000 comments and more than 15,000 retweets. Most were of a highly critical nature.

“But when things are going well, you don’t hear from him,” Badain said. “I really can’t see the motivation for himself to create a legacy.”

With or without one, Mark Davis has changed the trajectory of Las Vegas sports forever.

Somewhere in there, perhaps not yet detectable, is a pretty amazing legacy.