When you subscribe we will use the information you provide to send you these newsletters. Sometimes they’ll include recommendations for other related newsletters or services we offer. Our Privacy Notice explains more about how we use your data, and your rights. You can unsubscribe at any time.

But the ex-wife of Rolling Stone Ronnie has put the wild parties behind her and is now doing her bit to save the planet. She is living off-grid at her Northamptonshire farmhouse, generating her own power with a battery of solar panels, getting her own water from a 200ft borehole and harvesting fruit and veg from her organic cottage garden. Since moving in 18 months ago, she has started rewilding the pasture where the previous owner’s horses grazed. And wildflowers are already appearing in blues, yellows and reds from the seeds she scattered around the pond. 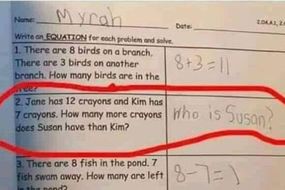 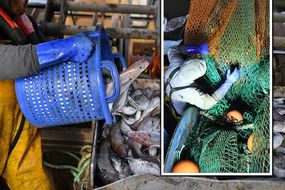 And another weapon in her campaign to go green is due to arrive soon…a beehive – not a 1960s hairstyle, but one that will produce honey.

It is a world away from touring with the Stones, who revelled in their decadent, hard-living image.

As we sat in the garden with swallows swooping overhead and warblers singing in the trees, Jo admitted: “When I was on tour with the Stones, the environment wasn’t high on the agenda.

“After all, I didn’t see daylight. I was only awake at night.

“But as a child I would camp in the garden, look at the butterflies. I have always loved nature.

“Now I want to be part of the solution not the problem. And how cool is it that I am in charge of my own power and my own water? 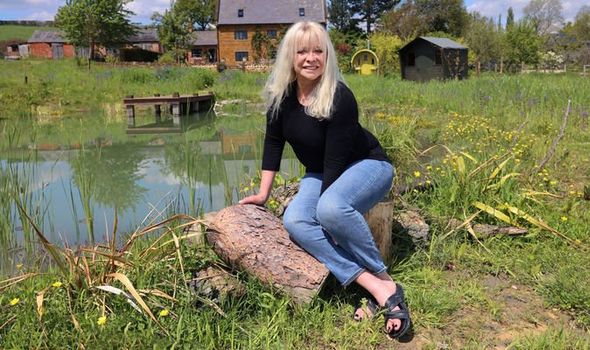 Jo Wood is toe-to-toe with nature at her eco-friendly farmhouse (Image: Jonathan Buckmaster)

“For me, going to my veg garden, pulling out some veg and eating it half an hour after, it’s a kind of heaven.”

Jo invited me and photographer Jonathan Buckmaster to visit her charming rural retreat as part of the Daily Express Green Britain Needs You campaign, which is urging Prime Minister Boris Johnson to show world leadership on the environment.

When Jo moved in there were already 29 solar panels connected to a grid of batteries, which store surplus electricity.

The downside is she needs a diesel generator to boost the batteries when the sun is not shining and Calor gas for the underfloor heating and cooking. Her water comes from a well and is treated, but to guarantee supplies she had experts come in and drill a borehole.

They went 200ft down to reach an ancient water supply Jo calls “dinosaur water” and says is better quality than the well’s.

She said: “There’s no fluoride in there and we’ve been told it will never run out.” 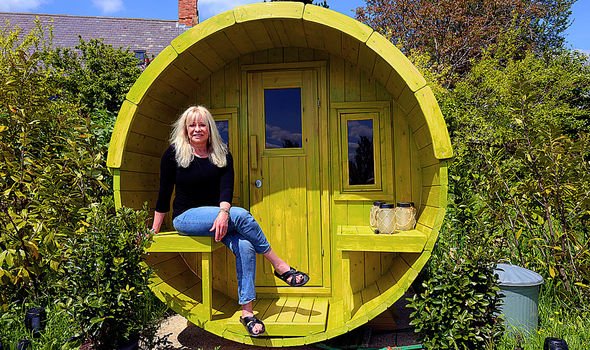 None of this came cheaply though. She paid ￡5,000 for a new generator, ￡7,000 on fresh batteries for the solar panel system and the borehole came in at ￡8,000, as well as installation costs.

Her fuel bills are about ￡1,200 a year for the diesel and ￡600 for the gas, but she expects these to fall.

Jo, a former model who was The Face of 1972, said: “If I had come here with an expert in off-grid living, I might have had second thoughts. But I have always wanted to live off-grid and, typical me, I just jumped in feet first.

“My friends thought I was mad, but it’s easy just to live in a flat.

“It has cost me more than I had planned but hopefully now everything is working, it is not going to cost me much to live.”

She added: “I’ve also received a cheque for a few hundred pounds from Ecotricity for my surplus solar electricity. 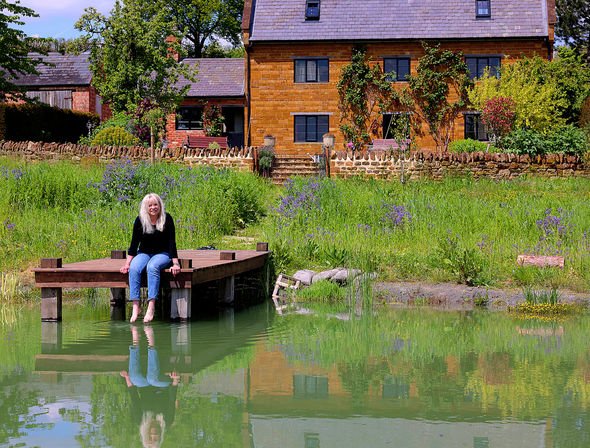 The rock chic made a pond with her son during lockdown (Image: Jonathan Buckmaster)

“I feel I am helping nature, rewilding my field, attracting insects that have declined a lot in the UK.

“I feel very much at peace with myself doing this. I’m proud of myself.”

It is not the first time Jo has tried to live a back-to-nature lifestyle.

She was one of 10 celebrities to take part in 2018’s Celebrity Island With Bear Grylls, when they had to survive off Panama’s coast using their wits and little else.

Jo said: “I loved the challenge of having to survive on the island for 28 days and living among nature. But this is a more luxurious version.”

She has been living here in lockdown with her and Ronnie’s son Tyrone, 37, who works for an environmental charity. 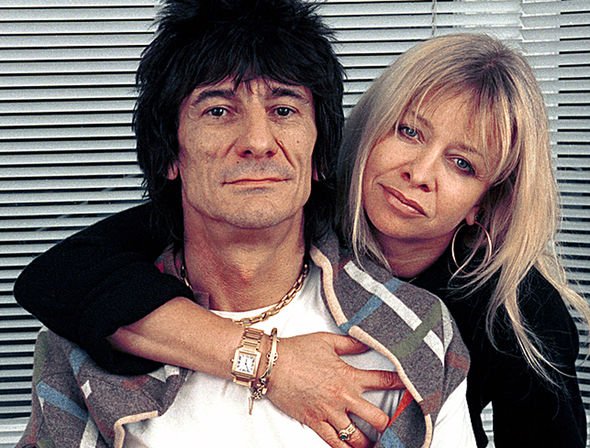 The ex-wife of Rolling Stone Ronnie has put the wild parties behind her (Image: Jonathan Buckmaster)

Now lockdown is easing she should be able to see more of the rest of her family – her and Ronnie’s artist daughter Leah, 42, who lives down the road, her son Jamie, 46, by her first marriage, and Jesse, 44, Ronnie’s son by his first marriage. She is also looking forward to seeing her 10 grandchildren, who see her as “Off-Grid Granny”.

Jo has championed organic foods since she was misdiagnosed with Crohn’s disease in 1989 and was steered towards pesticide-free products by a herbalist.

This led to her beauty products firm, Jo Wood Organics, a “cottage industry” she set up in 2005. Jo said: “I believe in saving the planet. We have only got this planet. It looks after us and provides us with everything we need but we are abusing it.

“We are polluting it and it breaks my heart. 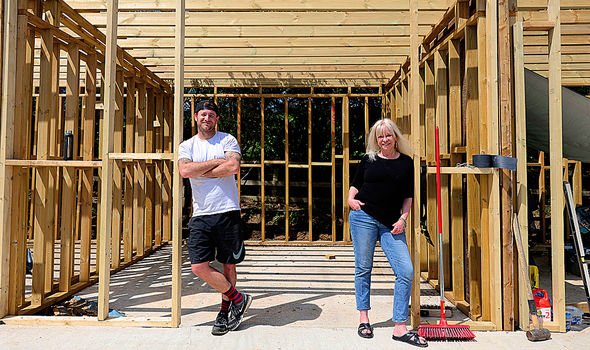 Joe with Tyrone, her son with the Stones’ Ronnie (Image: Jonathan Buckmaster )

“If we’re to have a better planet we need to change the way we eat. If enough of us buy organic food we will create such a demand that it will be worthwhile farmers going organic.

“We would then clean up the rivers, seas and our food.”

When she was living the rock ’n’ roll lifestyle, could she, I asked, have ever imagined herself living self-sufficiently like a character in The Good Life?

With a smile, Jo said: “Not in a million years.”